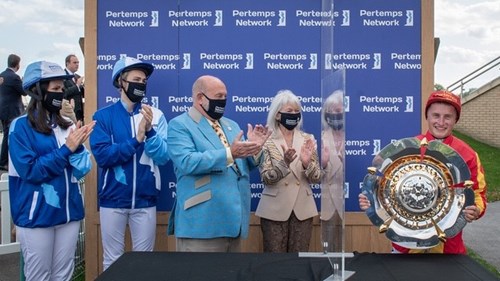 Leading recruitment giant Pertemps Network Group were headline sponsors for the 2020 Pertemps St Leger Stakes, stepping in just three weeks before to support the world’s oldest classic in what has been a hugely difficult year across the sports and entertainment industries.

The St Leger Stakes is the final classic of the British Flat season, open to fillies and colts. It is the longest in distance and the oldest in years with the inaugural running taking place in 1776.

Pertemps Network Group returned to support the St Leger, having previously partnered the race between 1995 and 1997.

The renewed partnership comes at a time when the coronavirus pandemic continues to pose a huge threat to the hospitality and entertainment industries, with uncertainty surrounding when crowds will be allowed to return to live events.

Lifetime President of Pertemps Network Group, Tim Watts, commented: “The St Leger Stakes was a great success! It was a pleasure to have returned to sponsor this year’s Pertemps St Leger Festival at Doncaster.

“Within the current climate, the hospitality and entertainment industry are facing an overwhelming difficult period and their future remains under threat.

“It was a pleasure that we at Pertemps Network could support the national effort towards getting the economy back on track.”

The 2020 Pertemps St Leger Festival was run at Doncaster between Wednesday 9 and Saturday 12 September with all of the action broadcast live on Sky Sports Racing and on terrestrial television via ITV Racing.